END_OF_DOCUMENT_TOKEN_TO_BE_REPLACED

The early morning hours did not deter viewership for the Rio Olympics 2016 which hosts 120 Indian athletes - the largest number so far in the history of India's participation in the Olympics: 5.6 million viewers in India tuned in to watch the opening ceremony which kicked off at 4:00 AM on 6th August 2016. Day one of the biggest sports event in the world received a grand viewership of 52.7 million viewers in India, despite claims that this year's Olympics telecast has evidently received the worst television viewership ratings compared to previous years in some parts of the world.

6.1 million viewers watched the telecast repeat of the opening ceremony later in the day and interestingly, 7.5% who had the watched the live telecast early in the morning came back to watch the highlights. 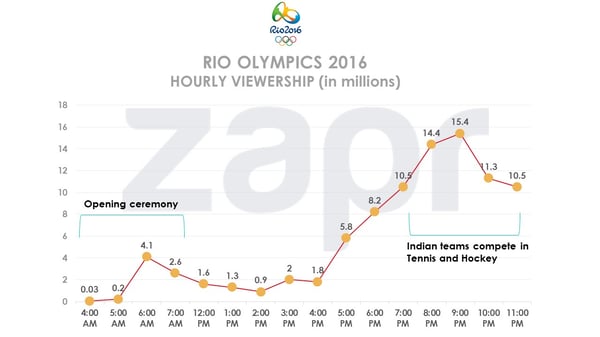 The live telecast saw the highest viewership for the day between 8:00 PM and 11:00 PM during which famous Indian sportspersons took on the field: 14.4 million viewers tuned in between 8:00 PM and 9:00 PM witnessing the Indian men’s hockey team’s first win in the Olympics this year. The viewership rose to 15.4 million viewers in the next hour as leading Indian tennis players like Leander Paes, Rohan Bopanna and Sania Mirza kicked off with their first matches in the tournament. 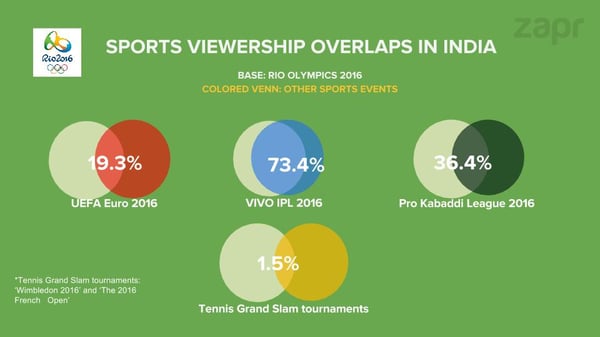 Apart from watching sports channels, the Indian viewers who watched the Rio Olympics also heavily consume Hindi Entertainment on TV - ‘The Kapil Sharma Show’ on Sony Entertainment TV, ‘Jhalak Dikhhla Jaa’ on Colors TV and ‘The Voice Kids’ on And TV are some of the top shows watched watched by these viewers. 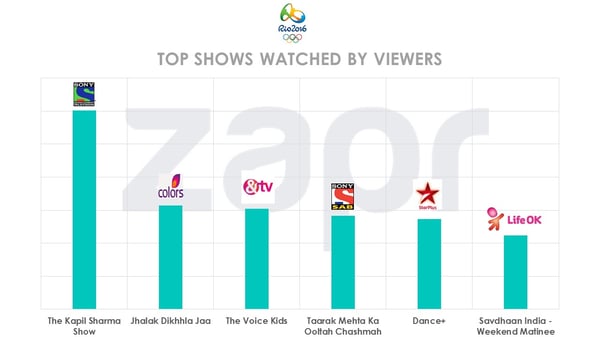 ZAPR can help you identify individuals who watched the Rio Olympics 2016 and profile their TV viewing habits across widely watched sports and other TV genres. Many brands are leveraging ZAPR’s technology that enables you to identify your audiences with varied interests, spread across different genres, and target them for your brands and products.