END_OF_DOCUMENT_TOKEN_TO_BE_REPLACED

Flying Cursor and their client, an adventure touring bike brand, recently ran a TV commercial campaign during the most charged up season in India - the Indian Premiere League (IPL). The brand wanted to make sure that youthful, energetic IPL audiences engaged with the bike brand’s messaging. They also wanted online continuity for their TV campaign by reaching offline prospects who already viewed the TV ads. Flying Cursor decided to target both audiences on their mobiles, a personalised medium where people could directly sign up for the brand’s free test rides.

To achieve campaign objectives, Flying Cursor had to connect people’s offline media consumption with their online response in a way that was never done before. Using Audio Fingerprinting at Zapr Media Labs, they profiled 40+ million users and precisely identified who watched IPL matches and therefore viewed the bike brand’s commercials on offline TV. The same users were shown brand ads on any app they used on their phones, leading to 4x higher time spent on the brand’s website and 2x higher engagement on Mobile. We targeted sign-up forms for the test rides via Facebook and got 200+ leads in the first week which rose by 150% at the end of the campaign.

“We have been working with Zapr since a long time and recently we did a brand campaign for a popular adventure touring bike brand. Zapr was our key platform as we wanted to tap online audiences based on their TV consumption. We are very impressed with the audience profiling they have done for our campaign which not just delivered good numbers but helped us to drive test rides for our client brand.”

To identify people who watched IPL matches and Flying Cursor produced TV commercials; and engage with them on Mobile.

Our technology had to operate like offline cookies: detect what people watched on offline TV and reach the same people on their smartphones.

The challenge was to create interest among custom offline audience segments and get them to sign up for the bike brand’s test rides. There were four steps to meeting our objectives:

- Target brand ads on their mobiles on any app they used at any time during the campaign; frequency caps were imposed to make sure users were not over-exposed to the ads

- Monitor the campaign and optimize ad exchanges across partner networks

We deployed advanced TV-to-Mobile targeting to build interest for the bike brand among IPL audiences. Simultaneously, we lead the brand’s TVC viewers deeper into the sales funnel by getting them to sign up for the test rides via Facebook. 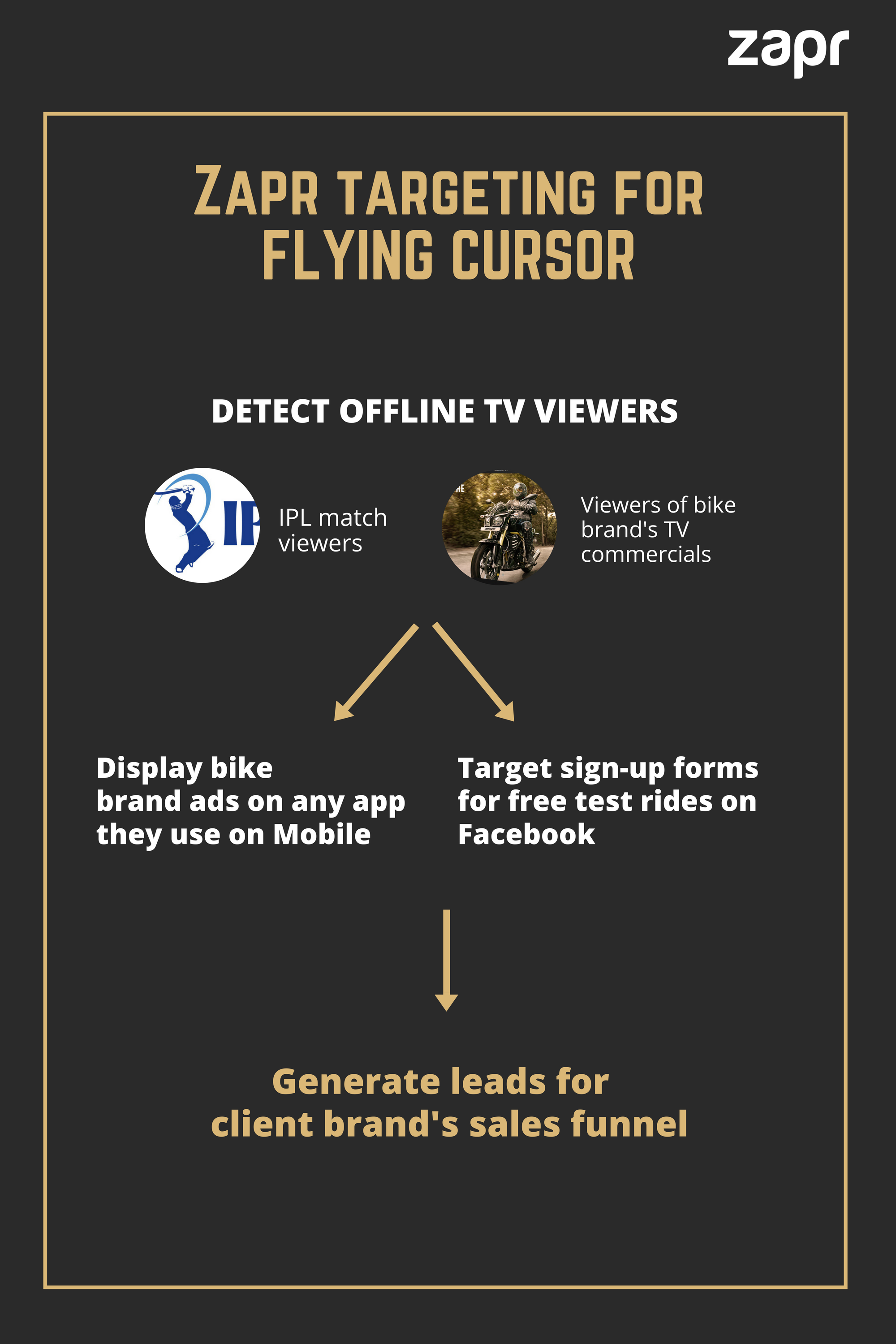 The campaign ran on Zapr’s programmatic network across our user base of 40+ million smartphone users. Target groups were shown banners and interstitials on whichever mobile apps they spent time, across different categories like e-commerce, games, news, food and lifestyle.

The bike brand’s test ride forms were displayed on users’ Facebook feeds right after they watched the bike brand’s ads on offline TV. Apart from monitoring the campaign on our internal platform, we built a reporting connector with Facebook to review performance and automatically refresh our audience pool on a daily basis, making necessary changes to achieve Flying Cursor’s campaign goals.

As a result of the interest generated among target groups, the campaign led to an impressive rise in time spent on the bike brand’s website - 4x higher than industry benchmarks. We delivered as high as 3% Click-Through-Rates among targeted users with 500+ leads generated from the sign-up forms on Facebook.

Interestingly click-through-rates among targeted users peaked during the morning hours around 8 AM, while weekends witnessed 13% higher engagement than weekdays.

Targeted users were further analyzed across their consumption of 500+ TV channels. We understood their viewing habits across all the shows and channels they watched on offline broadcast TV. This data was profiled and stored in our servers to aid future brand engagement campaigns on mobile.

Turning offline TV campaigns into actionable results is nearly impossible without immediately engaging consumers. Zapr solves this industry problem by perfectly syncing offline TV viewership with near real-time engagement on second screen. This gives brands and agencies a firm control over prospects generated by their mass media campaigns, and enables a two-way communication via Mobile.

(Also read how 1,00,000 TV commercial viewers made snap decisions for a holiday at Club Mahindra)

Check out more of our successful campaigns with leading brands and agencies here, or explore more user engagement offerings at Zapr Media Labs.