END_OF_DOCUMENT_TOKEN_TO_BE_REPLACED

8th November 2016, the announcement of demonetization, sent citizens and banks scrambling towards a more digitalized India. Kotak Mahindra took quick action and in just four months, launched its 811 mobile app getting everything down from online banking, shopping, travel bookings to mobile recharge. The BSFI brand ran a campaign on broadcast TV themed around some of the app’s many offerings. However they wanted to make sure the app’s messaging reached a specific universe of smartphone users in India:

How to engage with people who owned smartphones but missed Kotak’s TV ads?

The brand solved this problem with unique TV-to-Mobile targeting at Zapr Media Labs. While the TV commercial ran on broadcast TV, we simultaneously detected smartphone users who missed Kotak’s TV commercial and engaged with them on their mobiles.

For those who didn’t engage immediately with the first video, we continued targeting them with sequential video ads themed around other app offerings - flight booking, mobile recharge and hotel booking. This way we added to the campaign’s overall reach by engaging more than 2.1 million Indian smartphone users who had missed Kotak 811 commercials on television.

At each level of Zapr targeting, Kotak delivered deeper brand message until targeted audiences engaged through views or app installs. The video completion rates for the campaign stood at 60%, which means more than half of the audiences who started the videos watched it till the end - 2x higher than industry benchmarks. Furthermore this targeted engagement triggered an impressive number of app downloads in less than three weeks landing people straight on the point of sales (mobile app).

To complement Kotak’s TV and digital campaigns by ensuring the app’s messaging reached smartphone users who missed the TV commercial as well as the YouTube campaign.

Our challenge was to detect and target the intersection of users who didn’t watch the TV commercial or the YouTube commercial for the brand. We had improve how they responded to the brand at every stage of the campaign by targeting only those who didn’t engage at each step.

There were four key steps in our challenge:

We designed a cohesive cross-device targeting to accurately detect both TV and mobile ad viewers, ensuring incremented engagement at every step of the campaign. 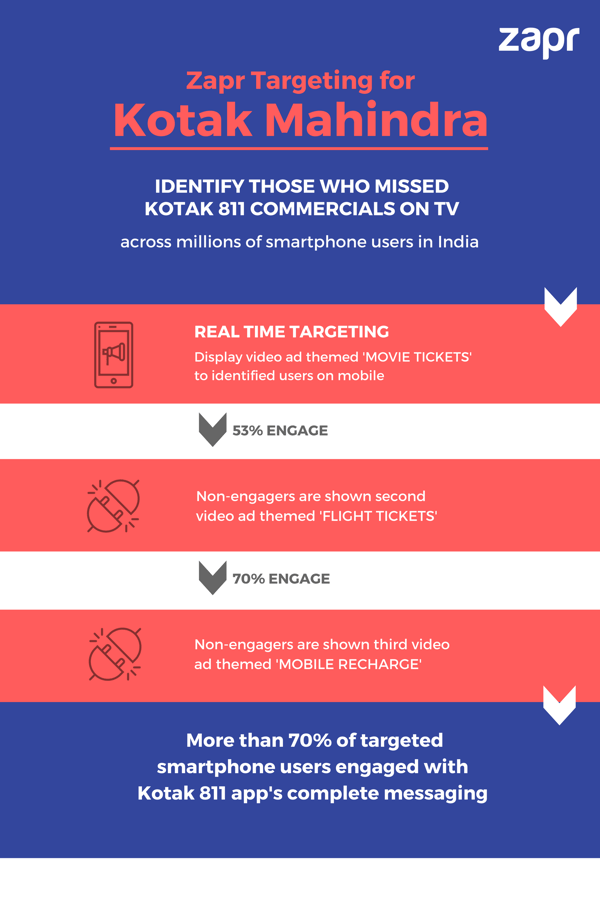 Across Zapr’s database of over 40 million user profiles in India, we used fingerprinting technology to detect people who missed Kotak 811 commercials on TV and on YouTube. Identified user IDs were fed into the Zapr ad-tech system where targeting parameters were seamlessly matched with ad requests from hundreds of publishers. Targeted users were shown Kotak 811 ads on YouTube or ANY app they visited on their mobiles.

To improve effectiveness of brand messaging, we mapped out users by their offline content consumption and and targeted them with different language creatives such as Bengali, Marathi, Telugu and Malayalam. For example, audiences consuming majority Bengali content on TV were shown Bengali ads, audiences consuming Marathi content were shown ads in Marathi and so on.

In less than three weeks, the brand reached out to more than 2.1 million unique individuals who missed Kotak 811 commercials on broadcast TV and YouTube.

By immediately filtering out those who didn’t engage and covering loopholes near real time, we got more than 70% of the target audience to engage at least once with the brand’s messaging. Results point out that more than 60% of people who started the video watched it till the end (view-through-rates).

The ultimate business impact of our targeting was a massive app downloads from the campaign’s install app option. 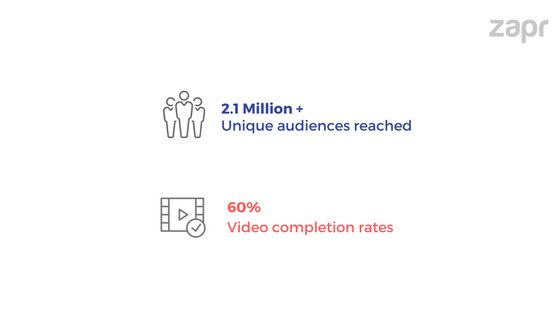 Marketers can reach us on hello@zapr.in to deliver similar campaigns or discuss new targeting ideas!

Zapr technology not only syncs TV and Mobile near real time, but also delivers powerful second screen engagement by ensuring incremented reach at every step of our campaigns, ultimately landing audiences on the brand’s point of sales.